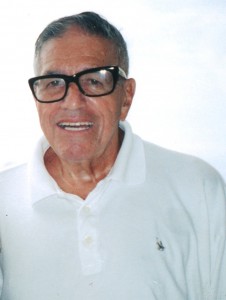 Taught by his mother, Arnold took up bridge at the tender age of five. Decades and many championships later, the cigar-chomping Grand Life Master is affectionately known as “the Godfather” to players in the Miami FL area, where he lives (Sunny Isles Beach).

Although not well known to contemporary players – he rarely plays at big tournaments these days – Arnold’s achievements in high-level competition speak for themselves: He is a world champion and winner of nine North American titles.

Arnold captured his first North American Championship in 1963, the Spingold Knockout Teams, but his favorite memory of playing in the event was in 1955, when it was known as the Master Knockout Teams and scored by total points.

Arnold played with Herschel Wolpert, Morris Freier, M.M. Goldman and Harold Harvey, and the underdog team defeated the defending champions – Lew Mathe, John Moran, Milton Ellenby, Meyer Schleifer and Manny Hochfield – by 540 points to make it to the round of eight.

With his favorite partner and protégé, Bobby Levin, Arnold won the Reisinger Board-a-Match Teams (1979), the Vanderbilt Knockout Teams (1980) and the Bermuda Bowl (1981). Levin says of Arnold, “He always put ethical behavior first. He is a tremendous competitor, great declarer, fantastic player and a great guy. He has been like a brother and a father to me.”

Unlike many other Hall of Fame members, Arnold didn’t play bridge often. His winning record was achieved during the time of his life when he was running a successful major appliance business. Arnold’s aptitude for numbers and cards made him successful in both ventures. In addition to an encyclopedic knowledge of many subjects, Arnold also had instant and total recall for his store’s inventory and for phone numbers. He didn’t have much need of hand records as those are all stored in his head too.

A longtime friend said of Arnold, “Russ won so many championships, he certainly had nothing to prove. Considering that he was running a business while most bridge pros were just playing cards, his winning record is phenomenal. He didn’t play often. But the most remarkable thing was the way this shy man earned the respect and admiration of all his peers.”