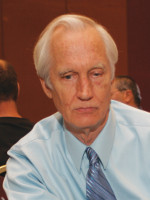 Grant Baze of San Diego CA was one of ACBL’s top players and a man who set standards for comportment and ethics. Baze always dressed in a suit and tie when plying his trade –he was one of the most successful pros on the tournament circuit. He earned a reputation as a dogged, tireless competitor who was nevertheless a friendly opponent and the model of what a partner should be. Baze was born in San Diego, the son of a U.S. Marine Corp officer. The family traveled a lot, and Baze spent time in Virginia, Ohio and Georgia before graduating High School in 1961. At his first opportunity he returned to California. At Stanford University, a familiarity with bridge became an obsession to the near exclusion of classes. Four years after he entered Stanford, he left one quarter short of a degree. Nearly two decades later, mostly to please his mother, Baze earned a bachelor’s degree in political science and then returned to full-time bridge play.

Baze did his fastest learning playing rubber bridge, playing for days on end. In the early Eighties, he started playing professionally and had a brief partnership with Barry Crane. In his career, Baze amassed more than 41,000 masterpoints, won four world championships, including three Senior Teams, and seven North American titles. He won the Barry Crane Top 500 three times and was the first player to record more than 3000 masterpoints in a calendar year.

In 2009, the ACBL Board of Directors renamed the Senior Knockout Teams in honor of Baze and a group of his friends provided a trophy for the event.