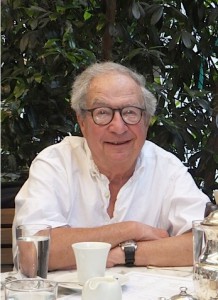 Billy Rosen of Highland Park IL was introduced to bridge while attending De Paul University.  He watched the games at the student union and then jumped in and played.  “I liked bridge because I was good at it, and it was fun,” Rosen said. “I played five times a week, and my grades showed it.”

Rosen won his first national title in 1952, the National Men’s Pairs in partnership with Arthur Grau. At the Summer NABC in 1953, Rosen really made his mark.  He won the prestigious von Zedtwitz Life Master Pairs with Milton Ellenby and the Spingold with Ellenby, Don Oakie, Douglas Steen and Cliff Bishop. The Spingold victory was Rosen’s ticket to the world championships.

In the fourth annual Bermuda Bowl, held January 9-14, 1954 in Monaco, Rosen’s team, with the addition of Lew Mathe, defeated the French team by 49 matchpoints after playing 224 boards. The victory made 24-year-old Rosen the youngest person to win a world championship — a record that held for 27 years.

Rosen is an eight-time North American champion. In addition to his previously mentioned wins, Rosen won the Spingold again in 1954, the Master Mixed Teams twice (1958 and 1966) with his wife Eunice, the Grand National Teams Championship Flight in 1978 and the Open Board-a-Match Teams in 1980. He won the McKenney Trophy in 1953 and was a member of the Chicago team that claimed the Sports Illustrated Trophy in 1965.

Outside the world of bridge, Rosen found his forte in trading. He was a trader in the over-the-counter market from 1960 to 1972 when he became a member of the Chicago Board of Options. He traded on the floor for his own account until retiring in 1994.

Although Rosen compares winning a world championship at such a young age to getting dessert first, he still plays once a week in a home game.