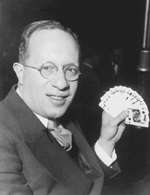 David Bruce, Life Master #1, was one of the preeminent tournament players of the Thirtys.

Born in New York City, David Burnstine (the name he went by during his playing career), had won 26 national titles by 1936, the year the rank of Life Master was established.
Everybody who was anybody in the world of bridge in the 1930s played at the Contract Bridge Club in New York. It was here that Burnstine and other experts of the day regularly engaged in competitive play.

Burnstine’s earliest tournament victories came as a member of the famous Four Horsemen team, captained by P. Hal Sims. The other members of the team were Willard Karn and Oswald Jacoby.

In 1932, Burnstine left the Four Horsemen and established his own squad, the Bid-Rite team, featuring Richard Frey, Howard Schenken and Charles Lockridge.

The Bid-Rite team was defeated, however, by the Sims team in the 1932 Vanderbilt.
Burnstine made some roster changes, replacing Lockridge with Jacoby, whom he recruited from Sims, and adding Michael T. Gottlieb.

This team, named the Four Aces, won seven national team championships during the next two years. With Burnstine at the helm, the Four Aces, with additional changes in the line-up but always with the great players of that time, would dominate tournament team play for the remainder of the decade.

Burnstine’s tournament victories include a first-place finish in the first official World Championship in 1935. He also won the American Whist League All-American Open Teams four times (three of which were auction bridge), the USBA Open Teams twice, the Open Pairs once and the American Bridge League’s Challenge Teams three times.
To this impressive collection of titles won in the early days of tournament bridge, Burnstine added five wins in the Vanderbilt and three in the Spingold. When Burnstine was named the first Life Master, no one argued the point.
Burnstine had a well-deserved reputation as an excellent bidder. His contributions to early bidding literature include two books. The first, Four Horsemen’s One Over One, outlining the bidding structure of the Sims’ team, was published in 1932.

Burnstine’s other book, Four Aces System of Contract Bridge (1935), was co-written with other members of that team. The latter book is significant for the manner in which it revolutionized quantitative auctions.
The principal legacy of David Burnstine in the world of bidding theory is his invention of the strong artificial 2*C* opening, still used by the majority of tournament players.
Burnstine also created intermediate two-bids in the other suits, a prominent feature of modern-day Acol.
Burnstine was a supremely self-confident player, a supportive partner and an unsettling opponent. He especially enjoyed sparring with Ely Culbertson and frequently bested him, despite the fact that Culbertson was a household-name celebrity of Culbertson.

After moving to Los Angeles in 1939, where he lived until his death in 1965 at the age of 65, Burnstine made very few tournament appearances. After his illustrious career in the 1930s, he changed his name to David Bruce.