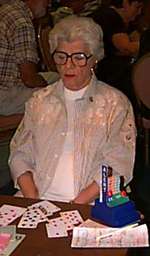 Edith Kemp Freilich came from a bridge playing family. She grew up in South Orange NJ and later moved to New Yorkand Miami Beach. Freilich is an ACBL Grand Life Master and a WBF World Master. She became Life Master #70 in 1947.

In 1997 Freilich was the third woman elected to the ACBL Hall of Fame. She joined Josephine Culbertson and Helen Sobel Smith in the then select group of 22 bridge greats.

Freilich and Smith are the only two women who have won the Vanderbilt, the Spingold and the Reisinger (formerly the Chicago). To date only 64 players have accomplished this feat.

Freilich won her first major championship – the NABC Women’s Pairs (now the Whitehead Women’s Pairs) – with Mae Rosen in 1941.They repeated their victory in 1942 and 1943.  Since then she has acquired an additional 26 NABC titles and represented the US in three World Championships.

A frequent partner and teammate in open and women’s events was her sister, the late Anne Burnstein. The pair accomplished a rare double when they won two national titles at the Spring NABC in 1979.

“It’s wonderful to have a sport you love,” she said. “I’m going to be playing bridge as long as I can walk and talk.