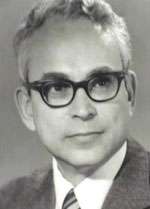 Richard L. Goldberg, who died in 1999 at age 76, was a major figure in North American and world bridge for many years. At the world level he was a member of the Committee of Honor of the World Bridge Federation (WBF). He served the WBF as treasurer and finance officer from 1981 to 1990. He was elected a member of the WBF Executive Committee in 1972 and served on that board until 1984.

At the North American level, Goldberg began his career as a tournament director in 1959, rising to national tournament director in 1961. The ACBL drafted him for work as tournament division head in the New York City office in 1963, and he switched to Greenwich, Connecticut, when the ACBL moved there. In 1965 he became assistant to Alvin Landy, the executive secretary. He served in this post under Landy and later under Easley Blackwood until he took over as chief executive officer in 1971.

Goldberg faced a monumental task during his first year as CEO. The board of directors voted to move ACBL headquarters from Greenwich to Memphis, Tennessee. The task was accomplished in December 1972, when the ACBL headquarters building was completed.

Goldberg was named the ACBL’s Honorary Member in 1994. He was a member of the ACBL Laws Commission and the ACBL Goodwill Committee. He was also a good bridge player, achieving the rank of Life Master with several regional championships to his credit.

He retired as CEO in 1984 and moved shortly thereafter to Nashville, where he was born and where he earned a bachelor of science degree in engineering at Vanderbilt University. He worked as a civil engineer for 15 years before turning to bridge as a player and then as a director.

After announcing his retirement, Goldberg said his most satisfying moments in bridge came during his time as a tournament director. “Then I was working directly with the members,” Goldberg said, “and there is no substitute for being around people, understanding them, talking to them.”

On Goldberg’s death, Roy G. Green, former ACBL CEO, recalled Goldberg as “a wonderful human being who left his mark on the American Contract Bridge League. The people who worked with him loved him and respected him as an outstanding leader and a friend.”

Tommy Sanders of Nashville, former ACBL President and former District Director for District 10, remembered Goldberg as “my friend for 50 years — we were always close. He always gave me encouragement when I was on the Board of Directors. I loved him like a brother.”

Henry Francis, whom Goldberg hired as editor of The Bridge Bulletin in 1972, also called Goldberg one of his closest friends. “I never worked for Dick — we always worked together. He was one of the kindest men I ever knew. His son said it best at the funeral services: ‘He was a gentleman and a gentle man.’”