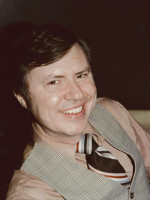 This years Blackwood Award inductee, Max Hardy, was born into a musical family in Alva OK. His father, Lee Hardy, was a college music professor. His mother, Belva, had a masters degree in voice. Max earned his masters degree in music theory at Roosevelt University in Chicago and began a career as an opera singer. He later served on the faculty at the Los Angeles Conservatory of Music.

In the Sixties, Hardy discovered bridge and it wasnt long before he made a significant career change. Hardy took up directing in 1961 and progressed rapidly through the ranks, becoming an associate national TD in 1973. The tall, articulate, well-dressed and outgoing director was a fixture at tournaments for four decades until his retirement in 2000.

As a professional player, Hardy was among the top 200 all time in masterpoints earned. Hardy never won a North American championship, but he won more than 200 regional events, most in the era before flighting, stratification and bracketed knockouts. At the time of his death, Hardy had accumulated more than 10,000 masterpoints. Many of his successes at bridge were in partnership with his wife, Mary.

Hardy was also a prolific author. He wrote 13 books, including several on the 2/1 game force bidding system. His first book, Five-Card Majors  Western Style was advanced for its time and a precursor to the 2/1 books.