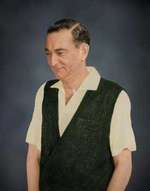 Harry Harkavy of Miami Beach was a native New Yorker and bridgeclub manager who gained national renown as a player. He was considered one of the world’s greatest at declarer play and a brilliant, though unorthodox, bidder.

“I never saw Harry Harkavy make a mistake,” said Richard Freeman about his old friend. “I remember the time everyone in the North–South field was playing 1NT and making either 90 or 120. But Harry made plus 600. What’s so unusual about that? Harold was sitting East–West.”

Eddie Kantar promises that “since he played so much professionally, Harry declared more 3NT contracts than any man alive.”

Bobby Wolff claims that “Harry set a record opening the bidding 1*D* (often disregarding diamond length). This allowed his partner to respond with a major, enabling him to rebid notrump and apply his magic.”

Harkavy was recognized as one of the world’s most proficient declarers. Perhaps his greatest accomplishment was winning the Spingold and the Vanderbilt in the same year, 1963.

Harkavy died in San Francisco on his 50th birthday. He had gone there to compete in the Fall NABC and succumbed to a pancreatic attack.