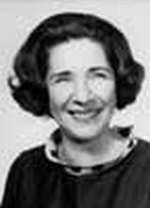 Hawes, who lived in Fort Worth TX , graduated from Cornell at age 18. Dorothy Truscott, writing about Hawes in 1987, said her longtime partner “had one of the brightest minds in the bridge world. But she belonged to an age where men preferred to think of brains as a masculine attribute, and intelligent women did best not to disillusion them. Emma Jean radiated charm and good manners as she clobbered her opponents.

Longtime friend, Betty Ann Kennedy, remembers playing with Hawes at a San Antonio regional in the Sixties. “We were leading the field after the first session. I went to dinner with some other friends and we got back 10 minutes late for the evening session. “Al Sobel, who was the chief tournament director, got on the microphone and announced that in view of my tardiness, we were being penalized three-fourths of a board. “Emma Jean leaned across the table and said, ’Don’t worry about that, honey; we won’t need those points.’ “She was right,” remembers Kennedy. “We won by a wide margin. That (the penalty) was no hill to a climber.”

Hawes made her first mark in national bridge tournaments when she finished second in the Mixed Board-a-Match Teams in 1952. Her team: Sidney Silodor, Johnny Crawford, George Rapée and Olive Peterson.

In a 1979 Bridge Bulletin interview, Hawes recalled playing two sessions with Silodor and one with Crawford. “Sidney and I got along just fine, but the third session I had to play with Crawford (East-West).

Hawes won her first North American title — the Open Pairs, a four-session forerunner of the Blue Ribbon Pairs — in 1958 with John Fisher. She won 10 more North American and four world titles before she retired in 1981.