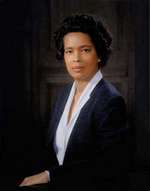 This popular co-winner of the Blackwood Award is weighted down by the numerous hats she has donned in the course of an exciting dual career, encompassing the judicial system and her love for bridge. The Honorable Amalya Kearse, a New Jersey native and Wellesley graduate, earned her law degree at the University of Michigan , where she served as editor of The Law Review. Now a senior judge on the U.S. Circuit Court of Appeals, she was the first woman to sit on the Federal Appeals Court in Manhattan .

Amalya served as editor of the 3rd Edition of The Official Bridge Encyclopedia and authored Bridge Conventions Complete and Bridge at Your Fingertips. She was honored in 1980 by the International Bridge Press Association as “Bridge Personality of the Year” and has won seven American Bridge Association Championships and five North American Bridge Championships. For years, she juggled her time at the NABCs, bringing along court homework, working out at the gym and playing bridge.

Amalya’s dedication to our great American judicial system and her devotion to bridge convincingly disproves the old saying that one cannot serve two masters at the same time.