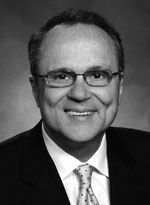 Mark Lair took the podium in Las Vegas at the Hall of Fame dinner in 2008, but it was not to be inducted. He was offering comments and congratulations to his former partner, Mike Passell on his induction.

In 2009 Lair had a different mission when he took center stage in one of the most important moments of his bridge career – as a new member of the ACBL Bridge Hall of Fame.

Lair is one of the most accomplished of North America’s full-time players, standing No. 4 on the all-time list of masterpoint winners with more than 53,000. He has won 20 North American championships and more than 1000 regionals. He has competed internationally on many occasions.

A devoted family man, Lair lives in Canyon TX, a suburb of Amarillo.

Hall of Famer Betty Ann Kennedy was among those who offered praise for Lair during the Goodwill meeting at the Spring NABC in Houston. “He is the epitome of the Southern gentleman,” said Kennedy, “and he is a born-again Christian who lives his faith. And he is one of the world’s great players.”