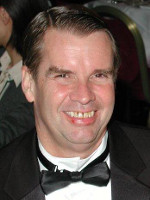 ACBLs 6,999th Life Master, Kyle Larsen of San Francisco grew up around bridge. The son of Alane and Kai  both successful tournament players in their own right  Larsen made his first mark on the bridge world in 1965 at age 15 when he broke the record for youngest Life Master by a full three years.

He recalls caddying with Gary Soules and Bob Crossley at the 1963 NABC in Los Angeles. Bob and I were caddying and the directors needed a pair to fill in. We were probably the best of the caddy players so we got paid to play. And he kept on playing.

At the 1965 Chicago NABC, Larsen and Bonnie Brier won the Teenyear Pairs. By 1968 he was breaking more records. That was the year he became the youngest player to win a North American Championship  the Reisinger Board-a-Match Teams, arguably the toughest event on the ACBL calendar. Hall of Famer Bob Hamman once described Larsen as probably the best-ever young player.

Meltzer agrees, He is just literally a perfect partner. You get from Kyle 100 percent support every minute of the time. He is always at the table, always on his partners side.

Larsen teamed up with Meltzer to win five NABC titles and two world championships, the 2001 Bermuda Bowl and the 2006 Rosenblum Cup.

Jo Morse, a frequent Larsen partner, is also a fan. Kyle is one of the best partners, she says. Hes so supportive of his partner that you really want to play your best. Hes low-key. Hes quiet. Hes just a really nice guy.

In addition to his two world championships, Larsen has won 12 North American Championships and was the npc of 2007 Senior Bowl Team.