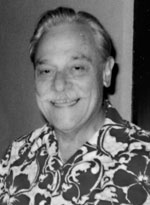 One of the all-time great tournament directors, Jerry Machlin was selected to receive the Blackwood Award for 2008, but because of his ties to the Washington DC area, his induction was held to the Summer NABC in 2009.

When Machlin died in 1997 – he had been retired for nearly 20 years – former Bridge Bulletin Editor Henry Francis wrote: “Machlin was one of the grandest of the grand old-time tournament directors. He followed in the steps of his Uncle Al – Al Sobel – and eventually became ACBL’s chief director, just as Sobel had been for many years. He began working at tournaments in the Forties at the insistence of Sobel and became a full-time director in 1950.”

Machlin was a gifted story teller who penned numerous articles for the Washington Bridge League Bulletin. A collection of his best stories are contained in a book hailed as one of the best of all time, Tournament Bridge: An Uncensored Memoir.

The legendary TD helped lead an American bridge team in the first international bridge contest ever staged in China, in 1981. He directed special matches between Congress and Corporate America.

Upon retirement, Machlin started a new career as a player, which provided more material for his humorous writings. He delighted in telling of his misadventures.

Wrote Francis, a former TD: “I can say that working with Jerry was interesting and exciting. I had some of my best times when working two-man tournaments with him.”