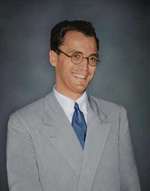 Recipient of the von Zedtwitz Award, New Yorker Merwyn D. Maier, affectionately known as “Jimmy,” is undoubtedly the least-recognized bridge aficionado to be enshrined in the Hall of Fame. However, he definitely deserves his place among the bridge greats.

Sadly, Jimmy’s bridge career was cut short in 1942 when a mysterious virus claimed his life at the age of 32.

The personal tributes and accolades of his peers on the occasion of his untimely death suggest that Maier had embarked on a career that might well have turned out to be unparalleled. In March-April 1942 ACBL Bulletin editor Geoffrey Mott-Smith called him “one of the foremost players in the country.” According to Howard Schenken, “Jimmy was far and away the best partner I ever had.” In his publication,The Education of a Bridge Player, Schenken stated, “Had he lived, he might have become the greatest bridge player of all time.” Sidney Lazard recalls his good friend, the legendary Ozzie Jacoby, singling out Maier as the best bridge player he had ever seen. Edith Kemp Freilich related vivid memories of playing against Maier while still in her teens and confirmed Jacoby’s assessment of his incredible prowess at a very tender age.