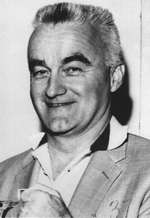 Among the many stars of the game of bridge, one of the greatest competitors was Lewis L. Mathe. The intensity of his play, his commanding table presence and his superb card playing skill ensured his place among the giants of the game.

Lew Mathe, a real estate appraiser and broker, enjoyed a successful bridge career — as a player and as an administrator — that spanned more than three decades.

Mathe’s victories at the national level attest to his talent. He won the Chicago (now the Reisinger) four times, the Vanderbilt three times and the Spingold once.

Mathe demonstrated his ability in the international arena by becoming a Bermuda Bowl champion in 1954. He went on to represent North America in four more Bermuda Bowls.

Mathe also represented the United States in the World Team Olympiad in 1960. Mathe and his wife, Eugenie (who died in 1991), won the European Open Teams in Hungary in 1975. Mathe was a WBF Grand Master.

His accomplishments as a player also include contributions to bidding theory. The Mathe Asking Bid, used after responder has made a jump limit raise, is employed to discover if responder has a singleton.

In addition, Mathe created a defense to a strong 1*C* opener, wherein double shows a major two-suiter, while 1NT shows the minors (with all other bids being natural).

Mathe’s general approach to bidding was a natural, descriptive one. This style was prevalent on the West Coast, and Mathe was one of its chief exponents. Although Mathe’s star faded with the advent of more scientific approaches to the auction, his success with those methods is remarkable.

Mathe served as mentor to the rising stars from California during his career. Eddie Kantar, Bob Hamman and Don Krauss were among those who played with Mathe early in their careers.

Known for his intensity and energy at the table, Mathe was a self-proclaimed perfectionist who expected much from his partners.

He was a firm believer that bridge expertise is innate, not acquired, and that a healthy sense of self-confidence and ego is an integral part of being a top-notch player.

While Mathe acknowledged that he could be a challenging partner at times, he felt that inculcating a strong sense of competitive spirit in his protégés was necessary for their development.

No one would suggest, however, that Mathe himself was anything less than professional and sporting at the table.

Mathe once noted that “(experts) will beat you because . . . they’ve got good judgment. If you have ability, if you have the gift . . . you’re going to be a good bridge player.”

Lew Mathe certainly had that gift.