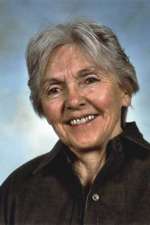 If Jacqui was seen at the bridge table minus her needlepoint, knitting or a mystery book on her lap, one would suspect she was an impostor. Despite the combination of her signature jeans and T-shirt appearance and nonchalant table demeanor, she is an intensely serious, competitive, brilliant, analytical and calculating player — the antithesis of what meets the eye!

According to close friend and partner Amalya Kearse, “She is not only a terrific player, but she also has such a love for the game that she never treats a hand casually, even if it is near the end of an event she no longer has a chance of winning or placing well. Every hand gets the attention it deserves.”

For many years, Jacqui was ranked as the leading WBF woman player and has captured several World Championships (Venice Cup in 1976 and 1978; World Olympiad Women’s Teams in 1980 and 1984; World Women’s Pairs in 1986) as well as NABCs, sectionals and regionals. In her second year of tournament play in 1958, she earned the title of New York Player of the Year, which marked the beginning of more than four decades of impressive triumphs.

Although her active professional involvement in teaching bridge and playing keeps her busy, this soft-spoken human dynamo is a fanatic exerciser, finds time to follow her favorite sports teams and tennis icons, excels in the kitchen and is an inveterate animal lover of all kinds.

Demonstrating the latter two, when a dinner guest arrived at her home one evening drooling from the wonderful smells emanating from the kitchen in anticipation of a delectable feast, Jacqui admonished her not to get too excited. “That’s not our dinner,” she said. “I’m cooking chicken for the Central Park cats.” Oh, yes, she has a sense of humor, too!