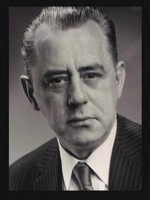 Victor Mitchell learned bridge as a teenager growing up in Brooklyn. By the age of 20, he was running a 24-hour-a-day money bridge club. In his prime, he was flamboyant and cocky when he needed to be — and he knew all the tricks of the trade.

When Mitchell died at the age of 71 in January of 1995, bridge lost one of its most colorful characters — a champion player, bridge philosopher, mentor to the stars.

“For more than 30 years,” said bridge star Ron Andersen in 1994, “Vic has been the expert’s mentor from coast to coast. His unknown contributions to the world of tournament bridge are far greater than those of better known people.”

Mitchell grew up in a rough and tumble neighborhood. His friendship with a policeman led him to discover bridge — the beginning of a love affair that lasted his whole life.

A Grand Life Master with more than 10,000 masterpoints, Mitchell won five North American championships and represented the United States in international competition several times. His major titles include the Spingold Knockout Teams (1956 and 1959), the Life Master Men’s Pairs (1962) and the Men’s Teams (1962 and 1963).

He finished second in the 1964 World team Olympiad and was runner-up in the World Mixed Teams, playing with his wife Jacqui, Sam and Tubby Stayman and Jimmy Cayne.

Mitchell’s expertise at the table was sometimes overshadowed by the stories told by him and about him. Jacqui, Victor’s wife of 35 years, figures that if she had written down the various tales, “I could easily fill a book.”

Mitchell’s second win in the Spingold Knockout Teams (1959) was especially significant because the win guaranteed his team an appearance in the World Bridge Olympiad the following year.

On the last deal of the Spingold, Mitchell found himself in 3NT redoubled. The critical suit was clubs, and at one point Mitchell played the queen from dummy, covered by his right-hand opponent with the king.

Mitchell, who felt sure of the layout of the cards, followed low and said, as his LHO played the singleton ace, “My first Olympiad.” Mitchell’s team won by 1 IMP.

Another story involved the legendary Ira Rubin, sometimes referred to as “The Beast.” Mitchell and Rubin were opponents in a rubber-bridge game when Rubin blasted into 6NT, which Mitchell doubled.

Mitchell was included as a real character in three bridge mystery books written by Matthew Granovetter, one of Mitchell’s protégés and a lifelong admirer. “If I had to play for my life,” Granovetter said, “I would choose Vic as my partner. It’s not even close.”

Mitchell didn’t play much in his later years, but he was usually on hand at NABCs to see his friends and give advice.

Mitchell claimed that he never played bridge for glory or prestige. “The people,” he said, “are more important than the bridge. I’ve met some of the most fantastic people playing bridge. I’ve had a ball.