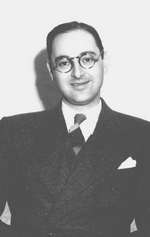 October 1996 marked three decades since Albert Morehead died of cancer at the age of 57. Many of today’s generation know little about the man except, perhaps, that there is a bridge library in Memphis named for him.

Morehead was a lad of 23 when Ely Culbertson hired him because of his talent as a player and an expert analyst. In a short time Morehead was technical analyst for The Bridge World magazine and technical manager of all Culbertson enterprises. He was only 25 when he played on the Culbertson team that defeated the English in the second international match for the Schwab Trophy in 1934.

Morehead not only published and edited the magazine, he was responsible for much of the writing of Culbertson’s books and radio scripts. He managed details pertaining to the Crockford Clubs in New York and Chicago . He negotiated endorsements and was executive director of Kem Playing Cards, Inc. — which he sold within a few years for a profit of more than half a million dollars.

A tireless worker, he was the first bridge editor of The New York Times. He wrote and edited bridge books. He ran a plastics business and did free-lance writing on a multitude of non-bridge subjects for leading American magazines.

After he resigned from the Times late in 1963, he devoted full time to the writing, editing and publishing of dictionaries, encyclopedias and a thesaurus which made him one of the foremost American lexicographers. His works also included many “Hoyle” books, giving the rules of cards games, on which he was the leading American authority.

Meanwhile, he found time for tremendous service to organized bridge. He was an officer of the United States Bridge Association when that organization amalgamated with the American Bridge League in 1937. He became a governor of the newly formed ACBL, which he later served as president and chairman of the Board. He was named Honorary Member in 1946. He was a member of the National Laws Commission and was in charge of production of the International Laws of Contract Bridge.

He not only served ACBL as adviser and laws consultant, he made enormous contributions to The Official Encyclopedia of Bridge — far beyond the scope of duties suggested by his title of chairman of the Editorial Advisory Board.

Early in 1966, while suffering from his then undiagnosed mortal illness, Morehead rose from a sick bed to travel to Amsterdam to present the constitution he had prepared for the World Bridge Federation — the first formal definition of the scope, structure, powers and duties of that organization.

Some insight into the man behind all this talent can be found in his obituary in the November issue of the 1966 Bulletin. Then editor Dick Frey wrote,

“Dwarfing these magnificent achievements were personal traits rare among men. No one ever saw him lose his temper at the bridge table or heard him speak an unkind word to a partner. He smiled often, but the only player he ever laughed at was himself.

Rarely if ever did he turn down a plea for help. Writing this, I am proud to acknowledge the debt I owe him and to claim that he was my best friend. The secret of his greatness was that there are scores of others who will truly say exactly this of Albert Hodges Morehead.”

Morehead left his large and valuable collection of books to the ACBL, and they formed the heart of what has been for more than three decades the Albert H. Morehead Memorial Library.