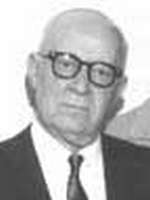 Alphonse “Sonny” Moyse was publisher and editor of The Bridge World from 1955-1966, spanning the era between Ely Culbertson, the founder of the magazine, and Edgar Kaplan.

An experienced and talented author, Moyse was the ghostwriter for two of Culbertson’s columns for more than 20 years. Moyse also wrote the humorous “Bridge with Jackie” stories, the fictional accounts of his and his wife’s bridge misadventures.

Moyse was an expert player, winning the Men’s Teams (1949) and the Men’s Pairs (1963), but generations of players will remember him best for his tenure as editor of The Bridge World.

Moyse joined the staff of the magazine in 1934 as assistant editor, and was the de facto editor from 1939 until Culbertson’s death in 1955. Moyse then purchased The Bridge World from the Culbertson estate. In 1963, he sold the publication to McCall Corporation, though he remained as editor.

Moyse was a champion of the natural school of bidding, and his views in this matter were unapologetically arch-traditionalist. Armed with an acerbic wit and an unfailing ability to analyze cleanly and clearly, Moyse took on decades of scientific-bidding advocates in the pages of his magazine.

He was a proponent of four-card major openings and 4-3 “Moysian” trump fits. Moyse recognized, however, that the advent of more scientific approaches to the auction was a regrettable (in his view) inevitability.

As editor of The Bridge World, therefore, he published the ideas and theories of expert players of the day. Moyse provided a necessary forum for the evolution of bridge theory.

As director of the ongoing bidding-panel series of the magazine, the Master Solvers’ Club, Moyse would increasingly find himself in support of minority opinions, but he accepted it all with a keen, acidic sense of humor and an unflappable faith in clear, sensible bidding.

In fact, Moyse enjoyed playing the role of the curmudgeon, criticizing in indignant tones the views of other experts.

The following excerpt from a 1960 issue of The Bridge World is pure Moyse:

“Not out of modesty but from awareness of fact we must observe that last month’s Master Solvers’ problems were not as good as we could have wished — no drama, no ’cuteness,’ and not controversial enough to warrant high indignation on our part, a state to which we’re accustomed and which therefore is healthful for us.”

Moyse died in June 1973 at the age of 75, weeks after being selected as an International Bridge Press Association Honorary Member, the first American to receive the honor.

The Bridge World, in an obituary and tribute to Moyse, praised the former editor and reminisced over his choleric disposition:

“After retiring, he kept his eagle eye on us. Only recently he called up in high dudgeon (and his was the highest dudgeon of any man we knew ): ’You’re letting the magazine go to the dogs!’— he had detected a fused participle, a grammatical form he detested.

“Sonny had a hot temper, and his rages were magnificent. But it was like a violent tropical storm — over in an instant with bright sunshine to follow. He roared at everyone and no one ever minded, for he was all bark and no bite — there was not a drop of malice in him.”