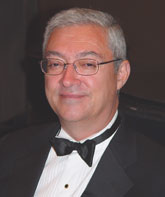 Since the early Nineties, Frank (Nick) Nickell has been captain of one of the most successful and dominating teams in organized bridge. Nickell and company have won three Bermuda Bowls and earned the silver medal in two others.

The Nickell team practically owns the Spingold Knockout Teams, having won the event nine times since the squad was assembled. For many years, until his death in 2009, Richard Freeman was Nickell’s partner on the team.

Nickell has won other major championships, including the Cavendish Invitational Pairs and the Blue Ribbon Pairs, but he has also distinguished himself as a businessman and a behind-the-scenes supporter of the game he loves.

In nominating Nickell for the ACBL Honorary Member of the Year award for 2003, former ACBL President Joan Gerard said much of what Nickell does for bridge goes unnoticed because he doesn’t seek publicity. “He gives and gives,” Gerard said. “There isn’t anything he won’t do.”

Nickell is president and chief executive officer of Kelso & Company, a private equity investment firm. He lives in New York City. Nickell and his wife, Carol, have two sons – Joey and Thomas.