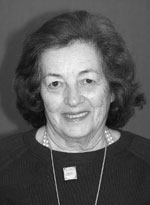 Aileen Osofsky, ACBL Goodwill Committee chair for more than two decades and one of the ACBL’s most influential voices for promotion of friendly behavior at the bridge table, received the Blackwood Award and was inducted into the ACBL Bridge Hall of Fame in 2009.

Osofsky was known as the Queen of Goodwill because she led by example. Fittingly, the surprise announcement that Osofsky had received the Blackwood Award came during the Goodwill Committee meeting at the 2009 Spring NABC in Houston. The normally loquacious Osofsky was left almost speechless when Steve Robinson told the assembly of the award, given to a person for contributions to bridge without necessarily being a top player. She may not have qualified as a world-class competitor, but those who knew her agree she had no peer as a Goodwill ambassador for bridge.

At the induction ceremony, her son Alan noted, “Although she isn’t the best player, she has done as much for the game as anyone.”

In her 25 years of service as Goodwill chair, Osofsky never stopped trying to convince ACBL members that friendly demeanor at the bridge table is good for everyone.