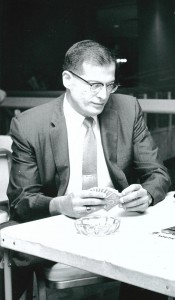 Ira Rubin was one of the great theorists of bridge. Rubin invented two-way two-bids, gladiator responses to notrump, and gladiator and extended Landy. His main interest was bidding. He says, ”Defense comes with a brain. Its instinctive.”

Rubin was amongst the most formidable competitors of his day, earning the nicknames “the Beast” and the “Fiery Genius” along the way.  According to Bob Hamman, “When the Beast appeared, as friend or foe, all present knew the battle had been joined.”  “In the last serious event that I played against Ira,” said Hamman, “I vividly recall him struggling valiantly to hold 2♣, not vulnerable, to down one. It did not affect the outcome of the match, but it showed the fierce competitive instincts that he always displayed.”

Rubin learned to play bridge (in German) from a group of refugees when his mother took him to Lake Placid in the 1930s. His mother was not a card player and his father played everything but bridge. When he was 9, he and some friends from around the block played using their own made-up variations.

Rubin played his first tournament bridge at the age of 16. I played a lot in college to the detriment of my marks, he says. His parents disapproved of his playing during high school and his early undergraduate years, but by his later college years, the tumult had died down  largely because Rubin was making some money playing cards.

Rubin began achieving tournament prominence in 1954, playing frequently with his favorite partner, Vic Mitchell, and accumulating a number of national titles, including a victory on a Spingold team that went to Turin for the 1960 World Team Olympiad.

From 1961-1962, Rubin played with Phil Feldesman and their results were remarkable. They won the Mens Pairs (now the Wernher Open Pairs) twice, the von Zedtwitz Life Masters Pairs, and the Open Pairs for the Cavendish trophy. Yet it was not long after these successes that the word was out: the Rubin-Feldesman partnership was through  a victim of its own explosive tensions.

This may have contributed to Rubin earning the nickname The Beast. In The Bridge Bum, Alan Sontag wrote, . . . The Beast, a title he knew, appreciated, and lived up to. He was a terror to play against: when his partner made a mistake, he rattled the windows with his screams, yet he was most generous when a hand was played well. Rubin said, “I forget who first called me The Beast. I would get mad at people when they started blaming me for errors and I hardly ever made an error. Thats the truth, too, not false bravado . . . despite my beastly outward nature, inside I was different.”

Rubin went on to win the Bermuda Bowl in 1976 playing with Paul Soloway. This was the first American team to defeat the famous Italian Blue Team in 20 years. And as one might imagine, Rubin said, It was the highlight of his career. Rubin takes great pride in the fact that another of his favorite early partners, Oswald Jacoby, once called him the best player in the world.

Rubin raised his family in his beloved, adopted home town of Paramus, NJ, where in the mid 1960s, the Mayor of Paramus honored him with the proclamation of Ira Rubin day recognizing his exceptional bridge tournament accomplishments during that period. In his last years, Rubin became more easygoing according to his son Eric. “He enjoyed reminiscing about past tournament triumphs and current bridge conundrums with his bridge friends. He became a lovable grandfather, father and friend.”

Rubin is survived by his sons Eric and Jeffrey, his beloved grand-children Danielle, Michelle, David and Jacob, and a daughter Loribeth.