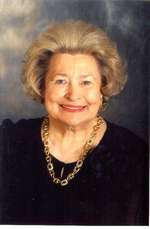 Carol Sanders along with her husband Tommy were co-recipients of the von Zedtwitz Award, which recognizes contributions to bridge through bridge-playing expertise or contributions to the game outside their area of bridge expertise.

The Sanders, affectionately known by their friends as Mama and Papa Bear, were married in 1956. They have six children and 14 grandchildren.

Carol and Tommy are longtime ACBL Grand Life Masters. Carol is a World Bridge Federation Grand Master. She won the Venice Cup in 1974 and 1976, the World Women’s Pairs in 1982 and the Women’s Team Olympiad in 1984. In addition, she was the non-playing captain of the winning Venice Cup team in 1987. She has won numerous North American championships.

The Sanders were co-panelists for The Bridge World’s “Master Solvers’ Forum” for more than 30 years.

Carol was also a trustee of the ACBL Charity Foundation from 1989 to 1997 and has been a vice chairman of the ACBL Goodwill Committee since the Eighties.