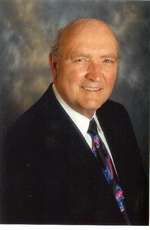 Tommy Sanders along with his wife Carol were co-recipients of the von Zedtwitz Award, which recognizes contributions to bridge through bridge-playing expertise or contributions to the game outside their area of bridge expertise.

The Sanders, affectionately known by their friends as Mama and Papa Bear, were married in 1956. They have six children and 14 grandchildren.

Tommy and Carol are longtime ACBL Grand Life Masters. Tommy, npc of the 1981 Bermuda Bowl champions, has several high finishes in international competition. He was second in the 1994 World Senior Teams. He won the 1981 Cavendish Invitational Pairs (with longtime partner Lou Bluhm). He and Bill Pollack won the Romex Award, presented by the International Bridge Press Association, for the Best Bid Hand of 1992-1993. Tommy has also collected numerous North American titles.

He is a traditional jazz buff and has co-produced Dixieland jazz albums as a labor of love.

Tommy and his wife were co-panelists for The Bridge World’s “Master Solvers’ Forum” for more than 30 years.

Tommy was instrumental in establishing the ACBL Educational Foundation — he was president for the first five years of its existence. Tommy is often given credit for the idea of the foundation but he set the record straight. “Buddy Spiegel, who was then working at ACBL headquarters, told me about his idea back in January of 1986. I had enough sense to listen to him and I became the moving force to get the foundation going.”

Tommy is now president emeritus of the foundation.