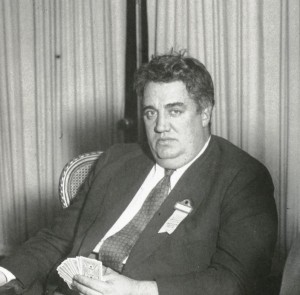 P(hillip). Hal Sims — the “Shaggy Giant” whose system had the greatest expert following prior to 1935 — was the first recipient of the von Zedtwitz Award.

After World War I, Sims devoted himself chiefly to competitive sports — including bridge. He held a national trapshooting record and won the Artists’ and Writers’ Golf tournament in 1937.

In auction bridge, he was a member of the highest-ranked team — the Knickerbocker Whist Club team — which included Sydney Lenz, Winfield Liggett, George Reith and Ralph Leibenderfer.

Sims and Ely Culbertson, who “fought relentlessly at the bridge table and outside,” according to Culbertson, teamed up to record the largest score in the history of the pairs championship of the Auction Bridge League. They also played their first contract bridge together.

“Secretly we admired each other” Culbertson wrote in his autobiography, The Strange Lives of One Man.

“Hal was my greatest rival and dearest friend,” Culbertson wrote in Sims’ obituary in The Bridge World. “For years we fought each other tooth and nail . . . Now he would come to the top, and now I. And never in all these years was there the slightest drop of personal bitterness in his big heart.”

Sims was captain of the contract bridge team called the Four Horsemen. Other members were Williard Karn, Oswald Jacoby and David Burnstine (Bruce). They won most of the principal American tournaments — the American Bridge League’s contract Challenge Trophy, the Vanderbilt Cup and the American Whist League and Eastern States’ auction championships — from 1931 to 1933.

When Jacoby and Burnstine formed the Four Aces with Howard Schenken and Michael Gottlieb, Sims began to play more bridge with his wife. The two challenged Ely and Josephine Culbertson to a 150-rubber match. When it took place between December 1931-January 1932, the famous Culbertson-Lenz match was known as the Bridge Battle of the Century.

The match ended with victory for the Culbertson’s by a margin of 16,310 points. The biggest rubber, however, went to the Sims side when Dorothy took time off to help Jo celebrate the sixth birthday of Bruce Culbertson. Strongly supported by the rising B. Jay Becker, still living in Philadelphia at the time, Sims defeated his arch rival by 2610 points.

Albert Morehead, who wrote Culbertson’s obituary in the January 1956 issue of The Bridge World, recalled that the two men “used to pursue their bitter enmity all day and then stroll off, arm in arm, to see a midnight movie together.”

Sims died in 1949 while bidding a hand at his winter home in Cuba . His epilogue to bridge players had been stated earlier:

Sound underlying principles of bidding are sound for all time. But the tactics for applying them may change and a flexible-minded player recognizes this.

The last word has not been said on contract bidding. I hope it will never be. If the time comes when the game ceases to grow, contract will no longer hold our interest.