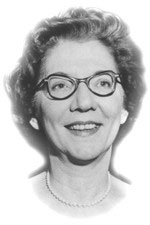 Helen Sobel Smith, the first woman elected to the Bridge Hall of Fame, is universally considered the best woman player of all time.

“In my lifetime — said Edgar Kaplan, former editor and publisher of The Bridge World, “she is the only woman bridge player who was considered the best player in the world. She knows how to play a hand.”

Smith learned to play bridge while a chorus girl in the Marx Brothers’ Animal Crackers and won her first national title, the Women’s Pairs, in 1934. She became Life Master #25 in 1941. By the end of her career she had amassed 5847 masterpoints.

Smith’s style was frisky and aggressive — so aggressive that “some of her male partners were intimidated,” Kaplan said. “These guys felt they were playing in the Mixed Pairs and they were the girl.”

1944 was a banner year for Smith — she won the Vanderbilt, the Spingold, the Women’s teams and the Master Mixed Teams and placed second in the Reisinger.

By 1948, she had amassed the greatest number of masterpoints of any woman, taking over the top spot from Sally Young, and holding it until 1964.

Smith was invited to play on Ely Culbertson’s team in the World Championship conducted by the International Bridge League in 1937 in Vienna .

This was tacit recognition that Culbertson, like many other experts, considered her the equal of any male player.

The team, which included Josephine Culbertson and Charles Vogelhofer, finished second to Austria .

Smith and frequent partner Charles Goren won the De La Rue International Invitational Pairs Tournament in London in 1956 — billed as a world championship – and represented North America in the Bermuda Bowl in 1957 and the United States in the World Team Olympiad in 1960.

Goren was the bridge writer/promoter and Smith “was the player. She was a marvel,” Kaplan said.

Smith “had a unique quality as a card player,” Kaplan said. “Every deal was fresh to her and her results were beyond the reach of her fellow experts.

She was incapable of making a learned play that was wrong on a given hand. Helen was not learned. She was brilliant.”

Smith had a poker face, Kaplan said, “and nobody ever knew what she was doing. Her judgment was extremely good and she would always feel perfectly free to deviate from her so-called system.”

Smith was a good partner — “very tolerant of success” — who was “lovely and humorous and frisky and magnificent,” Kaplan said. “There’ll never be another one like her.”

Smith won her last NABC title in 1968. the Master Mixed Teams, playing with Oswald Jacoby, Jim Jacoby and Minda Brachman. It was her sixth win in the event, tying her for the record with former partner Goren.

The Smith team’s margin of victory was 1 ½ boards and the senior Jacoby summed up the victory: “Helen was so sensational. She won it. We were just her teammates.”

When Smith died of cancer in 1969, the Bulletin remembered her as a player “without a peer among women and very few peers among men. Helen played like a man, it was true. But she also played like a lady.”