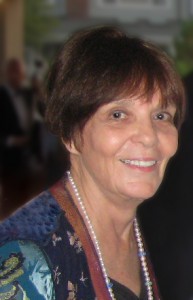 Peggy Sutherlin of Dallas TX has arranged her life around bridge. Sutherlin, a retired flight attendant, says, “When I applied for the job, I told them I wanted to be a stewardess so I could go to bridge tournaments. The plan worked! I was a stewardess for 37 years.”

Sutherlin is also a world champion. She won gold in the Women’s Team Olympiad in Maastricht, the Netherlands in 2000. In fact, both Sutherlins were champions there – her husband John won the Transnational World Senior Teams crown. Her other successes at the world level include a second in the World Mixed Pairs with her husband, two fourths in the Venice Cup and a fourth in the Women’s Pairs.

Her service to bridge started when she worked for Ernie Rovere (journalist, author and director of bridge cruises). She has since served on the Laws Commission, the Board of Governors for Dist 16 and 21, the Competitions and Conventions Committee, the Ethical Oversight Committee, the Women’s ITT Committee, and as Co-Chair of the National Appeals Committee. She and John were named ACBL Honorary Members in 2008.

Sutherlin has a BA from San Francisco State University. Her hobbies include genealogy, a subject she has pursued for over 30 years and about which she has written several family history books and numerous articles in genealogy journals. She is a member of Daughters of the American Revolution and Mayflower Society.