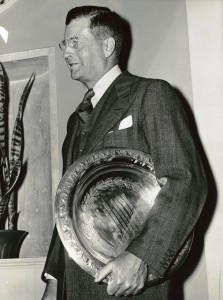 The modern version of our game — contract bridge — occurred as a refinement to the rules of an older version called auction bridge. Harold S. Vanderbilt of Newport RI is the person responsible for this improvement.

How did Vanderbilt come to be the father of the game we enjoy today? Aboard the cruise ship Finland in late October of 1925, Vanderbilt — who was traveling with three friends, all of whom were auction bridge enthusiasts — tested an idea he had for making the auction bridge version of the game more interesting.

In auction bridge, players scored points for taking a certain number of tricks as in the modern game. The problem, however, was that players received game and slam bonuses even if they didn’t actually bid a game or slam. For example, if you were in 1NT making three, you got the game bonus anyway.

Vanderbilt decided to make it more challenging by requiring a partnership to actually bid to the game or slam level in order to receive the bonus. Since this refinement made slams too risky to attempt, he also increased the slam bonuses.

Finally, he developed a scheme for doubles and redoubles so that penalties for sacrificing were equitable. Vanderbilt dubbed this new version of the game contract bridge.

The rapid spread of contract bridge from 1926 to 1929 is largely attributable to Vanderbilt’s espousal of it; his social standing made the game fashionable. Vanderbilt’s technical contribution was even greater. He devised the first unified system of bidding, and was solely responsible for the artificial 1*C* bid to show a strong hand, the negative 1*D* response, the strong (16-to-18 point) notrump on balanced hands only, and the weak two-bid opening.

These and his other principles were presented in his books, Contract Bridge Bidding and the Club Convention; The New Contract Bridge; Contract by Hand Analysis; and The Club Convention Modernized. Vanderbilt was a member of the Laws Committee of the Whist Club of New York that made the American laws of contract bridge (1927, 1931) and the first international code (1932). He then became chairman of that committee and largely drafted the international code of 1935, the American code of 1943, and the international codes of 1948 and 1949. He remained co-chairman of the National Laws Commission of the ACBL for the 1963 laws.

In 1928, Vanderbilt presented the Harold S. Vanderbilt cup for the national team-of-four championship. This prestigious contest has been held annually to the present day. The Vanderbilt Knockout Teams is played at the Spring North American Bridge Championships. This became and remained for many years the most coveted American team trophy, mainly because the replicas were donated personally by Vanderbilt to the winners.

In 1960 Vanderbilt supplied the permanent trophy for the World Bridge Federation’s Olympiad Team tournaments, again adopting the policy of giving replicas to the winners. As a player, Vanderbilt always ranked high. In 1932 and 1940 he won his own Vanderbilt Cup. He played by choice only in the strongest money games and was a consistent winner. His regular partnership with Waldemar von Zedtwitz was among the strongest and most successful in the U.S.

In 1941 he retired from tournament bridge, but he continued to play in the most expert rubber bridge games, in clubs and at home. In 1968, Vanderbilt spent more than $50,000 to recreate the lost molds for the replicas of the American trophy and to provide a quantity of replicas of both trophies sufficient to last from 20 to 40 years.

To perpetuate this practice of awarding individual replicas, Vanderbilt further bequeathed to the ACBL a trust fund of $100,000, a gift that wisely foresaw the possibility of inflation, but provided that excess funds, if any, can be donated in Vanderbilt’s name to a charity of ACBL’s choice. In 1969, the World Bridge Federation made Vanderbilt its first honorary member. When a Bridge Hall of Fame was inaugurated in 1964, Vanderbilt was one of the first three persons elected.