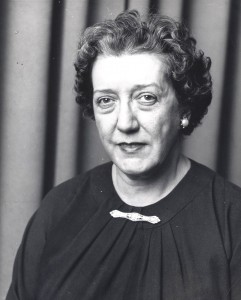 Margaret Wagar, a woman who distinguished herself as a player and as an administrator, was one of the all-time great players. She became Life Master #37 in 1943, the fifth woman to earn the ranking. She and Kay Rhodes share one of the most remarkable achievements in ACBL history — they won the Women’s Pairs four consecutive years: 1955 through 1958.

Wagar and Rhodes share another record, one of frustration. They were second in the Women’s Teams for seven consecutive years, 1952 thriugh1958.

Former world champion Carol Sanders considers Wagar one of her role models. “She gave me such opportunities when I first started playing bridge. She was so dear to me.”

Sanders tells this story about Wagar’s table presence and sense of humor:

“Margaret was playing at an NABC against someone who was known to try to get a look at your hand. Margaret was having none of this, so while declarer was studying the hand, she pretended to have a coughing fit.

“She opened her purse and took out her handkerchief. Then she detached the card — a queen — that declarer was looking for and folded it into the handkerchief and put it in her purse.

“If he could get a look at her hand, he wouldn’t find the queen there.

“Sure enough, declarer took the finesse into Margaret. She opened her purse, produced the queen and won the trick.

“She wasn’t going to let him read her.”

Former world champion Dorothy Hayden Truscott remembered Wagar as “a very gracious lady always — a very ladylike manner but with a twinkle in her eye.”

Truscott recalled playing with Wagar in a Women’s Teams:

“A woman — a young girl, actually — came to our table and she wasn’t wearing very much. Her outfit appeared to be two little straps.

“I would have been all right, but I caught Margaret’s eye and I began to giggle. I pretended to be coughing, but I kept giggling.

“Finally, I had to excuse myself and leave the table. As I left, I heard the girl say to Margaret, ’Is your partner all right?’