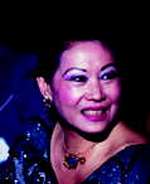 Kathie Wei-Sender, a three-time world champion and a tireless promoter of bridge, was the 1999 recipient of the Blackwood Award for service to the game outside of contributions as a player. The award was made on the vote of the ACBL Bridge Hall of Fame committee.

Born in Beijing (then Peking), China , Wei-Sender is a graduate of the Shanghai University School of Nursing. She arrived in the U.S. in 1949 and worked as a medical facility administrator for 15 years before retiring in 1972.

Although a U.S. citizen, Wei-Sender still visits China regularly and is the only American to hold minister rank in China . She is the official adviser to the Chinese Bridge League. She often leads trips to China for tournaments.

Wei-Sender took up bridge while she was married to the late C.C. Wei, a shipping magnate who invented the Precision bidding system. In 1971, she was co-captain and manager of the bridge team from Taiwan that surprised the bridge world by making it to the final of the Bermuda Bowl. She assumed the same role for Taiwan’s team in the 1972 Olympiad. C.C. Wei died in 1987. Kathie married Henry Sender of Nashville in 1992.

The official Ambassador of Bridge for the World Bridge Federation, Wei-Sender was named ACBL’s Honorary Member in 1987. She was named Bridge Personality of the Year by the International Bridge Press Association in 1986.

In between tournaments, Wei-Sender has served as a member of the ACBL National Charity Committee (former trustee and president), and an adviser to the ACBL Educational Foundation. She also served as member of the National Goodwill committee.

Wei-Sender has written for the Bridge Bulletin, contributing a series of articles on business leaders who play bridge, among other articles. She has also co-authored two bridge books — Action for the Defense and One Club Complete — and served as editor of Precision Today. Her autobiography is entitled Second Daughter. Her latest book is about Chinese leader Deng Xiaoping, who was a bridge enthusiast.