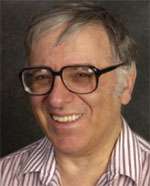 Kit Woolsey was born in 1943 in Washington DC. He earned a B.A. in mathematics from Oberlin College in 1964 and a master’s degree from the University of Illinois in 1965. Kit lives in Kensington CA with his wife Sally, a leading player in her own right, and their two cats.

His parents taught Kit the rules of bridge when he was 9 or 10, but he had no other formal training. His first victory at the national level came in 1967, when he won the Mixed Pairs with Trudy Machlin, wife of tournament director, Jerry Machlin.

He has since formed long-term partnerships with three experts, presumably chosen in part for maximum contrast with Kit’s own thick head of hair. From the late 1960s until 1978, Kit played mainly with Steve Robinson, with whom he won the Blue Ribbon Pairs and the Men’s Pairs. Kit and Steve invented several conventions in common use today, including Puppet Stayman and Crash over strong club openings. The two recently revived their partnership to win the World Senior Teams in 2000 and 2003. Kit’s second long-term partner was Ed Manfield, with whom he played from 1978 until Ed’s death in 1999. Their major championships included the Blue Ribbon Pairs, Rosenblum Teams, Vanderbilt Teams, Grand National Teams, multiple Men’s Pairs and B-A-Ms and Open Swiss Teams. Kit has been playing with his current partner, Fred Stewart, since 1999. Fred persuaded Kit to play a forcing club system for the first time, and Kit has become an enthusiastic convert.

In the late 1970s, Kit began a successful career as a bridge writer, producing Partnership Defense at Bridge, Matchpoints and Modern Defensive Signals. He was co-author of Clobber Their Artificial Club and won the IBPA award in 1977 for the best article or series on a system or convention.

If you watch Kit at the bridge table, hunched over, rocking back and forth in his chair, and frowning, you might wonder whether he is enjoying himself. At some point, though, someone will make a play Kit doesn’t expect. He will sit up straight, open his eyes very wide and say, “Now that is interesting.” Then his pleasure in the game is written on his face.