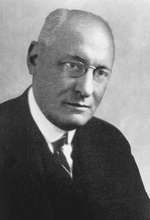 In the world of whist and auction bridge, which were predecessors to contract bridge, the game we enjoy today, Milton Work was a giant. These games were in their heyday at the turn of the 20th century, and Work was recognized as the outstanding American authority on them.

Work’s best known contribution to the modern game was the popularization of the Work point-count method of hand evaluation in which aces are worth 4 points each, kings 3, queens 2 and jacks 1. This method, first proposed by Bryant McCampbell in 1915, became widely known through Work’s lectures and writings.

Although Ely Culbertson’s honor-trick method of evaluation dominated the bridge world for much of the Thirties and early Forties, Work’s point-count method became the rage when Charles Goren made it the cornerstone of his Standard American system. This method, with some modifications, is still used today by players everywhere.

After a 30-year career as an attorney in Philadelphia, Work took a leave of absence in 1917 to tour the U.S. with Wilbur C. Whitehead, organizing bridge competitions and lecturing on bridge, to promote the sale of Liberty bonds. The success of the tour induced him to quit the practice of law and adopt bridge as a career.

Work was founder and chief editor of the earliest auction bridge magazines, the Work–Whitehead Auction Bridge Bulletin (1924–1926) and its successor, the Auction Bridge Magazine (1927– 29). Assisted by Whitehead, he served as the chief authority on the first series of bridge games broadcast on radio (1926–29). In 1928 he was paid $7000 per week to give brief lectures on bridge in the course of vaudeville presentations.

Work’s considerable fortune was substantially lost in the stock market crashes of 1929–30, and he resumed some bridge activities from which he had retired. In 1933–34 he resumed tournament play in contract bridge and won five consecutive sectional tournaments as a member of a team that included Goren, Olive Peterson and Fred French.