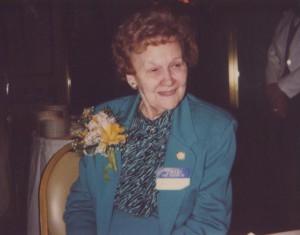 Ethel Keohane (Mrs. William H.) (1901-1995) of Wellesley Hills MA. Keohane served as the secretary of the Eastern MA Bridge Association for 18 years, as assistant chairman of the Goodwill Committee for many years, and was on the executive board of the New England B.C. Keohane got her start in bridge because her husband Bill played duplicate regularly and she decided to find out why he found it so enchanting. She bought a Culbertson book, studied it and ventured forth into duplicate in 1939. Keohane was Life Master #151 and the leading masterpoint holder in the New England states at the time of her death. In 1981, at the age of 80, Keohane survived a brutal car accident that killed her partner, Ida Bennett. Although practically every bone in her body was broken and she was not expected to live, she somehow managed to pull through. She was told she would never walk again, but after months of exercise and going through physical rehabilitation she regained the use of her legs. In 1982 she was named the ACBL Honorary Member. Keohane won two North American championships.