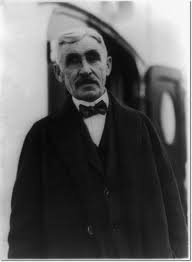 You’re probably thinking to yourself, “Why do I know that name?” Well, when you were in school, you probably saw it everyday – on your pencil.

Eberhard Faber was the son of pencil-manufacturing giant John Eberhard Faber. He was an expert card player who took up each successive development of the game from whist to contract. He served as the president of the American Whist League and was named as the American Bridge League Honorary Member in 1930. Faber donated the American Whist League Faber Challenge Trophy in 1927 which remained in play until 1952. More significantly, in the early days of ACBL, Faber donated every pencil that was used in tournaments until the League was financially stable.