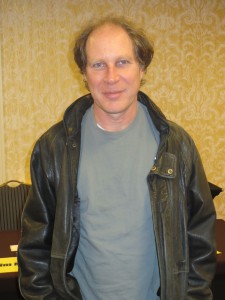 Fred Gitelman(b .1965) was born in Toronto ON. He is a leading bridge player, as well as the founder and manager of  Bridge Base Online, one of the most popular bridge playing sites. Gitelman was a member of the Canadian youth and later the open international teams before moving to Las Vegas  NV. He resides there with his wife, Sheri, also a well-known bridge player. A WBF World Grand Master and ACBL Grand Life Master, Gitelman has won the Rosenblum Teams (2010), seven North American Bridge Championships, a gold medal in the 2002 IOC Grand Prix, and was runner-up in the 1995  Bermuda Bowl. In 2005, he was elected as the International Bridge Press Association’s Personality of the Year and as the ACBL Honorary Member.