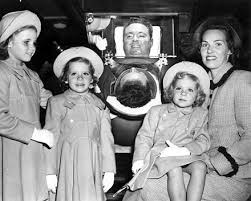 Fred Snite, Jr. (d. 1954) of Miami Beach was better known as the “Man in the Iron Lung.” He was a regular competitor in ACBL tournaments.

Snite was one of the first polio victims to receive significant publicity regarding chronic dependency on the iron lung. After college at age 25 he joined his family on a dream trip around the world in 1936. While in Peiping (now Beijing) he came down with polio. He was admitted to the Rockefeller Memorial Hospital. This hospital was known as the John Hopkins of the Orient.

His physician was a graduate of the Harvard Medical School. This hospital owned the only iron lung in China. At the time there were just over 200 iron lungs in the world. This iron lung weighed 1200 pounds.

After fourteen months in the iron lung, Snite was successfully moved from China to Chicago by ambulance, train and ocean vessel. He never became independent of the iron lung except for several hours a day by using a portable respirator that could be strapped to his chest.

In 1939 he married Teresa Larkin, a woman he had known before polio. They had three daughters. His medical problems took their toll and at the age of 43, Snite died in the iron lung from heart and lung failure.