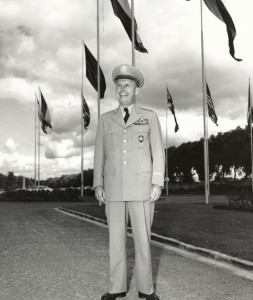 General Alfred M. Greunther (1899-1983) of Washington DC, a recognized authority on duplicate contract bridge and the outstanding director of bridge tournaments in America in the Thirties. He was the chief referee in the Culbertson-Lenz Match 1931-1932. He authored Duplicate Bridge Simplified, Duplicate Bridge Guide and Famous Hands of the Culbertson-Lenz Match. Gruenther was named honorary president of the World Bridge Federation from its inception in 1958 until he resigned from all bridge activities in 1978. Awarded the Wetzlar Trophy in 1938, he was also named ACBL Honorary Member in 1944. Gruenther was a charter member of the ACBL Laws Commission and its Honorary Member from 1948-1978 He was also chairman of the ACBL Charity Foundation from 1964-1965 and a former member of the Editorial Advisory Board of Bridge Encyclopedia. Gruenther served 38 years in the U.S. Army. His final military assignment was Supreme Commander, Allied Powers, Europe, 1953-1956. In this capacity he came into contact with General Dwight D. Eisenhower. On occasion they played bridge. He retired December 31, 1956 and from 1957 to 1964 was president of the American Red Cross, serving with particular devotion and special interest in its youth program. He received nine awards from Red Cross Societies from other countries for International Red Cross league activities. He was decorated by 14 governments other than the United States. He was the recipient of the Distinguished Service Medal with two Oak Leaf clusters and the Legion of Merit from this country. He had honorary degrees from 31 American colleges and universities.