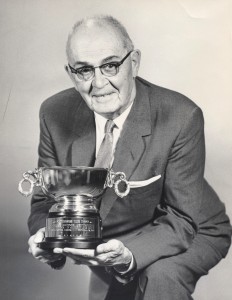 George W. Beynon (1864-1965) was born in Portage La Prairie MB; lived in St. Petersburg FL. An authority on tournament directing and one of the leading personalities in the world of bridge, his first career was as professional hockey player. He made music his major occupation, studying at La Scala in Milan and later directing orchestras in Europe and America. After becoming an American citizen in 1904, Beynon developed a successful plan for synchronizing music with silent films. He was musical director of Birth of a Nation (1915) and other early successes before retiring to East Orange NY in 1917. Forced out of retirement by 1929 crash, Beynon made a new career in bridge. After directing games in New Jersey and writing a Newark bridge column, he joined the Culbertson organization in 1935 as office manager and became secretary general for USBA. He rapidly became an authority on movements and continued to report on tournaments. After moving from New York to St. Petersburg in 1955, Beynon founded a successful correspondence school for directors and began writing a weekly bridge column for St. Petersburg Times. When he celebrated his 100th birthday in September of 1964 he was probably the oldest working newspaperman in America. His writings include Bridge Directors Manual, the standard work on duplicate organization, as well as many magazine articles. He was a contributing editor of The Encyclopedia of Bridge.