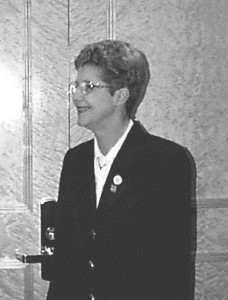 JOHNSON, Jane (1933-2000) of Memphis TN, former manager of ACBL Club Membership Department. Johnson worked on the fourth edition of Bridge Encyclopedia. She was a charter member and assistant manager of Parkway Village B.C. from early 1970s through 1982. She was editor of the Club Managers Newsletter. At NABC’s Johnson held the very popular and well attended “Coffee with Jane” for club managers.

When Jane Johnson died in 2000, the ACBL honored her by establishing the Jane Johnson Award, to be given annually to the ACBL employee who provided the best customer service. It was decided that the award would be dual – one for a staff member at Headquarters and one for a tournament director.