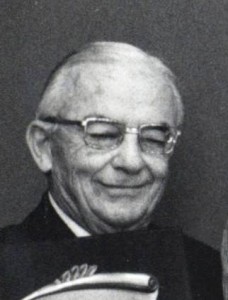 Joseph Stedem (1899-1983) of Palm Springs CA was the executive vice president of Hertz Corporation. He was ACBL president in 1968, a member of the ACBL Board of Directors from 1949-50 and from 1964-69, president of the ACBL Charity Foundation 1973-74, and a trustee from 1972-75. He was elected ACBL Honorary Member in 1971. He was also President Midwest Bridge Conference and Chicago CBA. Stedem helped initiate the ACBL policy, begun in 1949, of holding North American Championships in many different cities as possible. Previously all such tournaments had been held in the Greater New York area. The experiment of attempting a national in Chicago in 1949 proved most successful. As a result, players in all sections of the ACBL have had the opportunity to play in NABCs at not too great a distance from their homes. He was instrumental in the reorganization of the ACBL, working with Waldemar Von Zedtwitz. Stedem placed second NAC Senior Master Individual 1952 and won several regionals.