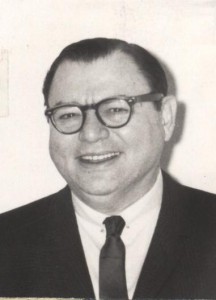 Julius Rosenblum (1906-1978) of New Orleans was a leading American bridge personality. He served as President of the World Bridge Federation from 1970-1976 and as ACBL president in 1951. He won the Men’s Pairs in 1960. Rosenblum captained the U.S. team that defeated Italy in the 1951 Bermuda Bowl and played briefly thus becoming the only person to have captained and played on a team that defeated the Italians. He also captained U.S. teams in 1963,1966,1967and 1968. He became WBF secretary-treasurer in 1966 and a voting member of WBF Executive Committee in 1968 when he was appointed to replace Waldemar von Zedtwitz, who retired. He was elected to WBF Committee of Honor. International Bridge Press Association bestowed the Charles Goren Man of the Year award on him 1975. In 1977 the Australian Bridge Federation named him to Life Membership, the 1st non-Australian to be so honored. Rosenblum was the ACBL Honorary Member in 1970.