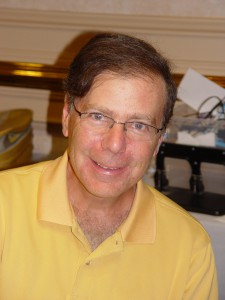 COHEN, Larry N. (b. 1959) of Boca Raton FL is a bridge lecturer and author. He has authored six books and six CDs including best sellers To Bid or Not to Bid and The Law of Total Tricks. He is also a regular contributor to The Bridge World magazine and the Bridge Bulletin. In 1980 his career was launched when at 20 years old, he was written up in the New York Times for opening 5*S*  holding 8-5 distribution with QJ1098xxx – – AKQxx – -. Since then he has won 25 North American Championships and placed second in nearly as many. In 1998 Larry and David Berkowitz came as close as it is possible to come to a World Championship without actually winning. In the World Open Pairs, they led throughout the five-session final, only to be overtaken on the last two boards. They also won a Bronze Medal in the World Team Olympiad. Cohen is a member of the National Appeals Committee, the Conduct and Ethics Committee, and Chairman of the Hall of Fame Committee. He was ACBL Player of the Year in 2002, ACBL Sportsman of the Year in 2003 and the ACBL Honorary Member in 2011. To this day, he is still mistaken for the “other Larry Cohen.” Cohen is an 11-handicap golfer.