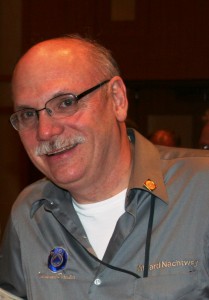 Millard Nachtwey (d. 2012) was a national tournament director and director-in-charge at Fall NABCs who served the Mid-Atlantic Bridge Conference for decades.

In nominating Nachtwey, ACBL Board Members Bob Heller (District 7) and Margot Hennings (District 6) praised him as “one of our game’s greatest assets. His contributions extended far beyond the selling table or making rulings or supervising colleagues, and that was particularly the case in Districts 6 and 7.”

Nachtwey was born in Washington DC and grew up in Bethesda MD. He earned a bachelor’s degree in English at Bucknell University, where he met his life partner of 40 years, Doug Grove. Nachtwey began his directing career in the early Seventies and operated his own club, Millard’s Bridge Studio, from 1978 until the fall of 1983, when he began to direct tournaments full time. His reputation as a master of tournament operations quickly grew, and he became the chief director for the MABC, a position he held for 20 years.

Nachtwey also lent his organizing expertise to the American Bridge Association, which has a presence in the Washington DC area, where Nachtwey and Grove lived. The ABA prevailed upon his volunteer spirit to mentor ABA directors on how to make a tournament experience the best it could be. ABA tournaments continue to be successful