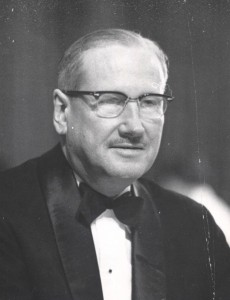 Col. Russell J. Baldwin (1889-1969) of Norwalk CT was an Army officer and expert on tournament procedure. A leading American bridge personality, he was active as an organizer from the earliest days of contract bridge. He became a director of the American Bridge League and its treasurer shortly after its foundation in 1927. He was a member of ACBL Laws Commission (originally Committee) since its foundation in 1933. Baldwin was primarily responsible for the first Duplicate Code issued in 1935 and played a considerable part in formulating subsequent codes. Author of McKenney-Baldwin schedules for Howell Movements and constructed other movements. His many contributions to tournament procedure included ACBL’s former method of dealing with fouled boards. Baldwin was a tournament director from 1927-1941 and after war service became ABCL business manager from 1948-1951. Recalled to military service at outbreak of Korean War and returned to ACBL in charge of tournament scheduling 1958-1963. He was named ACBL Honorary Member in 1943.