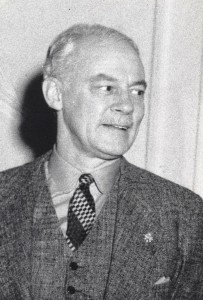 Shepard Barclay (1889-1955) of New York City, was a bridge writer, publisher, lecturer and club director. In 1927 he bought Auction Bridge Magazine and sought to make it a mass magazine, featuring the editorship of Milton Work and Wilbur Whitehead. The magazine failed (1929) and its mailing list was used by Ely Culbertson to start The Bridge World. Barclay conducted a bridge page, with doggerel pertaining to bridge as a regular feature, in the New York Herald Tribune 1929-1934. During those years he also ranked the 10 best (or most successful) players each year for Collier’s magazine. He conducted bridge clubs and duplicate games. Wrote many books on bridge and from 1932 until his death he wrote a daily newspaper feature on bridge for King Features Syndicate. Barclay was a member of the executive committees of the ABL and the ACBL from 1936-1949.  He was named ACBL Honorary Member in 1948.