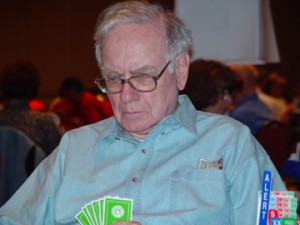 Warren Buffett (b. 1930) is an investor, industrialist and philanthropist. He is widely regarded as one of the most successful investors in the world. Often introduced as “legendary investor, Warren Buffett”, he is the primary shareholder, chairman and CEO of Berkshire Hathaway. He is consistently ranked among the world’s wealthiest people. He was ranked as the world’s wealthiest person in 2008 and is the third wealthiest person in the world as of 2011. Buffett has been a champion of bridge for many years. He has donated money to help promote the teaching of bridge in schools, he sponsors the Buffett Cup, a challenge match modeled after golf’s Ryder Cup, in which teams from Europe and the U.S. face off in different competitive formats, and can often be found playing on Bridgebase as “T-bone.”  Buffett and Bill Gates were named ACBL Honorary Members in 2010.