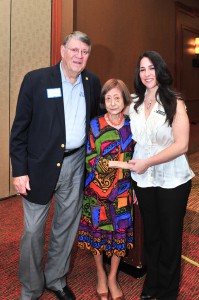 In the long history of the ACBL Goodwill Committee, there have been many magic moments at the committee’s thrice-yearly receptions. It would be hard to top the introduction of Kitty Gottfried as one of the two recipients of the Nadine Wood Volunteer of the Year award for 2014.

There were few dry eyes in the audience when the diminutive Gottfried was called to the podium by Goodwill Chair Sandy DeMartino. Gottfried seemed overwhelmed by the honor and was speechless for a few minutes as she listened to praise after praise for her long service to the Washington Bridge League as the queen of hospitality.

Margot Hennings, who represents District 6 on the ACBL Board of Directors, said Gottfried was the late Nadine Wood’s top helper for more than 40 years. “It’s nice to be able to recognize people who have given so much to bridge,” said Hennings.

When she took the microphone, Gottfried said she had a lot of help with her hospitality duties. “We had lots of good people from the WBF,” she said. “Volunteers need other volunteers.” As she made her way back to her seat after offering thanks for the honor, she received a standing ovation.

The honor for Gottfried was part two of the Volunteer of the Year award presented by 2014 ACBL President Bill Cook, who said he could not select just one recipient from the list of candidates given to him. As president, it was his duty to select the volunteer award winner or winners.

Co-winner Silvana Zangri was hailed for her dynamic performance as the top fundraiser during the joint operation between the ACBL and the Alzheimer’s Association last summer during the Longest Day event. Scotto’s Sagamore Bridge Club in Syosset NY (Long Island) raised more than $80,000 for the cause.

Al Levy, who represents the district that encompasses Long Island, said Zangri has few peers when it comes to energy. “She is an amazing woman,” Levy said. “She has run a number of businesses but took some time off to grow her family.” Noting that Scotto has five daughters, Levy said, “That alone gets you a medal.”

Levy said Zangri is a dynamic recruiter, outstanding club owner and volunteer, serving on the unit board.

Zangri said her success has been a team effort. “I could not do it by myself. There is an incredible group at my club.” Her family comes first, Scotto said, “but bridge is the second most rewarding thing in my life.”