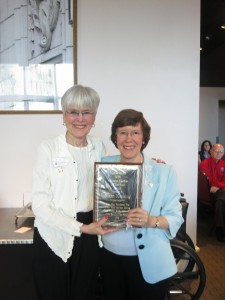 Sue Kroning of Seaside OR was selected from among 237 letters of recommendation for the award. Sharon Anderson said that in reviewing the letters, she noted that the highly respected volunteers had similar characteristics: they have a great attitude, an inclination to empower others, a commitment to hospitality “and they are willing to do anything.”

Kroning is a member of the District 20 board and the ACBL Goodwill and Charity committees.

As the district’s Intermediate/Newcomer coordinator, Kroning revitalized the I/N program, producing impressive results. For example, she helped the Portland sectional increase I/N tables from three in January 1997 to 64 in January 2012. Seaside went from no I/N tables in 1997 to 24 in one afternoon in 2009. She was I/N chair for the 2004 Spring NABC in Reno.

“I owe a lot to bridge,” said Kroning, who told of moving from South Africa to Phoenix AZ and knowing no one. “I went to the bridge club and was embraced and I got a lot of new friends,” she said.

Kroning credited her husband, Robert, for his support. “The spouse,” she said, “always does a whole lot of things.”