This is ACBL’s 10th year participating in the charity drive, which provides new toys to less fortunate children in the Mid-South at Christmas. In that decade, the ACBL has contributed more than $12,000 in toys.

Facilities coordinator Clyde Bell organizes and collects donations made at Headquarters in Horn Lake MS. This year, Bell also helped organize a collection at Direct FX Solutions in Memphis. The toys donated by Direct FX were included in the ACBL donation.

“Clyde has done a great job coordinating this program each of those 10 years,” CEO Robert Hartman said.

Toys for Tots aims to deliver a message of hope that will also assist children in becoming responsible, productive, patriotic citizens. Its objectives are to help less fortunate children throughout the United States experience the joy of Christmas, to play an active role in the development and motivation of children, to unite local communities in a common cause and to contribute to better communities in the future.

Since its inception in 1947, the annual toy collection and distribution campaign has distributed over 469 million toys to over 216 million less fortunate children. 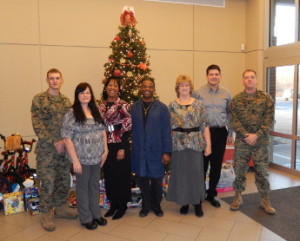