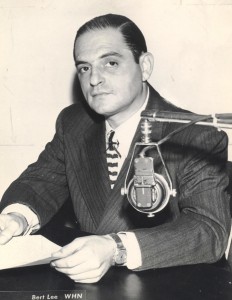 Bertram Lebhar, Jr. (1907-1972) a.k.a. Bert Lee had a national reputation as a sportscaster and later as a bridge player and administrator. In private life he owned radio and television stations in Florida. Perhaps his greatest achievements arose from his work as ACBL treasurer (1945-1947) and as a member of the Steering Committee. In the late 1940s, Lebhar was instrumental in ACBL modernization. He was perhaps the first man to visualize ACBL’s vast potential for expansion. His farsighted efforts were recognized when he was made ACBL Honorary Member in 1963. A founder of Greater New York B.A. and its first president in 1948, he donated the Lebhar Trophy to ACBL. Lebhar was named Life Master #61 in 1946 and was a two-time North American champion.